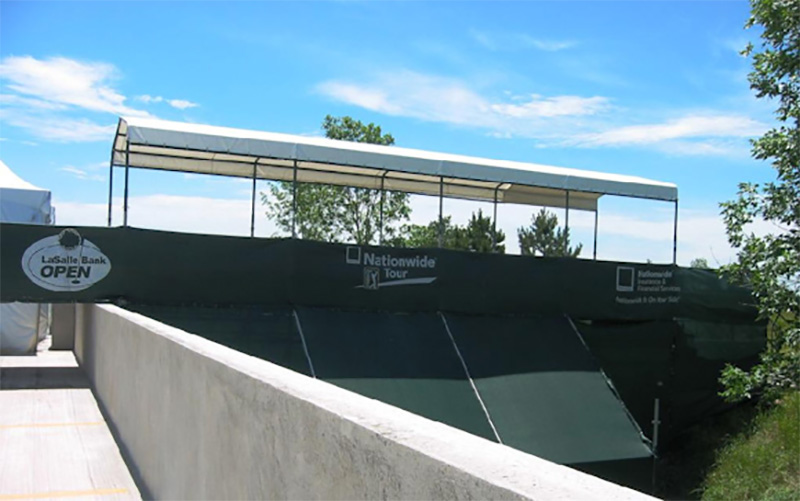 Atlas Bleachers (d/b/a Oosterbaan Scaffolding) was established by Garrett Oosterbaan, Sr. in 1959. Located at 113th and Forest Avenue in Chicago, the company's original business was painting and decorating. Soon after the formation of the company, Garrett's children, Garrett Jr., Agnes and Dick, inherited the company. In the early 1960s they recognized an opportunity to generate revenue through the rental of scaffolding as a service to the painters, plasterers, masons and contractors of Chicago. During this period the company moved to its current location at 11040 South Langley Avenue in the heart of Chicago, IL.

In the 70s, the company, under the direction of Garrett Oosterbaan, Jr. and Dick Oosterbaan, made a name for itself working on golf tournaments for Sports Network, now CBS.

Rich Oosterbaan became the president of Atlas Bleachers in 1993 and became the sole shareholder in 1997.

Atlas Bleachers has been family-owned and operated by three generations for over six decades.

Atlas Bleachers is an American-owned and operated business and use products only produced in the USA.

We travel nationwide to set up all of your bleacher needs whether you select a bleacher rental or permanent seating option. We have completed jobs in New York, Georgia, Michigan, Utah, Wisconsin, Missouri and Illinois. Atlas Bleachers continues the tradition of going the extra "mile" to make your event a success.

It was a pleasure working with Atlas Bleachers on our Notre Dame football spring game set up. The staff, equipment provided, efficiency of set up and tear down, attention to safety considerations, etc all met expectations and I would not hesitate recommending Atlas Bleachers to others based on our experience. Certainly we would be interested in using your services again if the need arises.

Everything was great. Thanks so much for your help. The seating and press boxes were perfect for the championships. Hope to work with Atlas again in the future.

As the Athletic Director at Niles North High School, I want to personally thank you and your staff for the excellent service you have once again provided installing the temporary bleachers in our stadium. We have always been pleased with the quality of work your company has provided us over the last six years.

My fifteen years as AD has taught me that dependable service from suppliers like you is essential to the smooth operation of our athletic programs. We can't succeed without your support and professional execution of projects. The grandstand bleachers we rent from your firm, Richard, are an excellent addition to our fields and provide a safe seating solution for our spectators.

This letter of appreciation is our way of informing you of our deep appreciation of your efforts. We look forward to continued business with you for years to come.